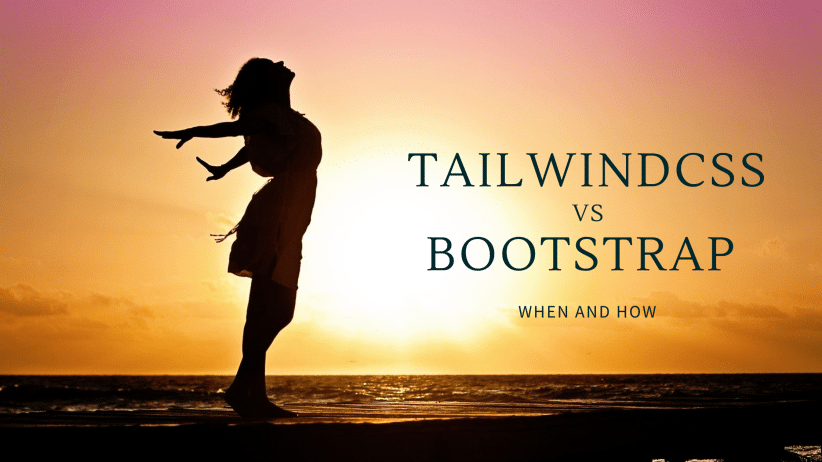 Tailwind CSS vs Bootstrap - How and When

Tailwind CSS is one of the most major CSS frameworks currently in the market. Bootstrap, a product of Twitter, gained much of market share. Tailwind CSS vs Bootstrap, Are they real competitors, or should you compare each other, like other frameworks?

Tailwind has become well-known for its flexibility. Bootstrap is known for its components. The different DNA of each other makes each popular.

Dead Webpages - How to Escape from it

Bootstrap is well-known for Twitter backed Bootstrap because Twitter developers Mark Otto and Jacob Thornton built it. It includes a lot of pre-build components ranging from Heading to Alert boxes.
Its component system is fundamental for many people who have some difficulties in making their own UI/UX, and they can plug and play Bootstrap in their web projects.

Tailwind CSS comes with the word "Rapidly build modern websites without ever leaving your HTML". Tailwind CSS is Gentoo/LFS of CSS. You must compile your CSS, add components, and build it in your unique way. It has no built-in, and you have to make your stylish components.

The limit of Bootstrap emerges when you need to tweak your design. We want our websites or apps in a unique display, or at least, different design. Bootstrap allows to, however, has more limitations than Tailwind CSS because of its component system.

When you need custom design with your own UI/UX, Tailwind CSS becomes your choice. Build each component of your UI with Tailwind and BOOM, have a complete design.

Another pro of Tailwind CSS is you only have what you created. With Bootstrap, you will get a lot of components which will lead to a bigger file size. The bigger the CSS, the slower the site is.

After pros, now cons.
Tailwind CSS needs UI/UX design, or minimum, a prototype. If you don't have a prototype, you don't know how to create your components. You have at least define your basic typo and widget styles. If you can't find one, you have to rely on bootstrap styles and draw from scratch, which is a time-consuming job. Bootstrap can start display when you embed from CDN, but don't wish anything work with Tailwind CSS.

Tailwind CSS has a long name set of classes to work. You need to set "3xl bold" while setting "h1" in Bootstrap, for example.

Using Tailwind CSS, you have to embed third-party libraries when you need to enable Javascript. Bootstrap has its own JS library, but Tailwind CSS need AlpineJS or others to work.

However, I can suggest one thing. Choose Bootstrap if you don't have UI/UX built, and I prefer TailwindCSS if you like customisation and have UI/UX.